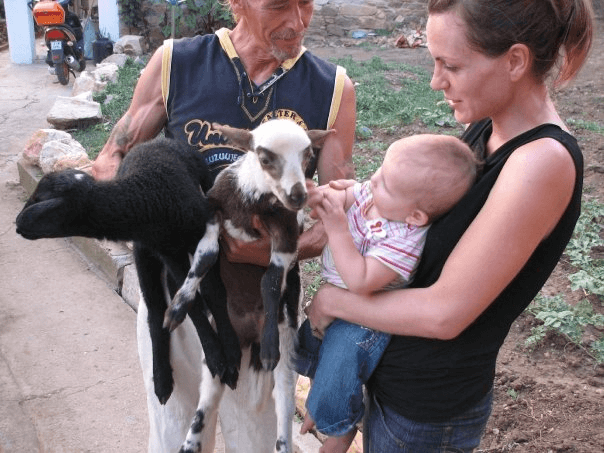 Community: Love it or hate it- You’re going to get it with bells on!

My husband and I both grew up in small rural farming communities, and while we were certain we didn’t want to go back to either of our old childhood ‘stomping-grounds,’ we did hope to find somewhere rural with a real sense of community to call home.

Enter Bulgaria. I had watched the original ‘Place in the Sun,’ back in 2001. For those who missed it, an unassuming English couple snapped-up a farm just outside Burgas for a song and in the process single-handedly launched the rural Bulgarian real-estate boom. Right there and then, I knew that’s where I wanted to be too. Although for me, it wasn’t just that I could potentially afford something with land, but that I had found a place which still had community- something resembling the Highland crofting community I had grown up in, but had now long gone.

A backpacking trip the same year confirmed Bulgaria was for me. I found a Teletext (do you remember those?) holiday to Sunny Beach, I took off by local bus the next day and explored VT and Shumen, Plovdiv and Smolyan and where ever the bus chose to stop in between. I loved it all and vowed the next time I would return; it would be to buy.

It took another six years for everything to come together. By this point I had gained a husband, a nine-month-old daughter and some modest savings for house-shopping.

Ian, my husband, was less convinced. He had heard me talking about Bulgaria for years but being a South African who had barely visited Europe his idea of rural Bulgaria was a hazy combination of Cotswold villages and Dutch tulip fields.

In the plan to win him round, our first trip in 2007 was everything I’d hoped for and more. Outside our small rental cottage in Studena, our brand-new neighbours would hang over the fence and bellow for us to come and help make cheese, milk sheep, join in fishing trips, and of course, partake in endless Rakia fuelled evenings of increasingly complicated and farcical mime.

Each evening Millie our nine-month-old daughter would beam and clap at the shepherd’s procession of animals; the sheep, led the goats, led the heifers and finally bringing up the rear, the huge water buffalo all rumbling past our front door.

Just one week in, he was smitten, and we began looking for a house in the area. Initially the plan was to find somewhere we could renovate during our holidays and ultimately to retire in, yet in reality it didn’t quite work out like that at all.

We were certain we wanted the area between Studena and Khnazhevo and viewed what felt like every empty house (and quite a few in occupation too) in the region with absolutely no success. In desperation our long-suffering agent took us to the last of her listed properties: a dilapidated plot on a hill overlooking the village of Srem. It was little more than a ruin, with no water or electric, yet the location was perfect, in the village- but not, and the view out over Sakar and Davishmagil was incredible. To her horror, we took it on the spot, and I’m pretty sure we remain the only people in Bulgarian real-estate history, to have forced a horrified agent into a deeply reluctant sale.

We spent the summers of 2008 and 2009 furiously under construction. Yet it wasn’t how I imagined. There was no choosing paint colours or kitchen cabinets, the site was so damaged, the time vanished on essential yet unseen jobs like retaining walls, finding plumbing wells and constructing septic tanks, it felt like each time we left, the sad broken house barely changed at all.

By 2010, with three-year-old Millie and our new-born Eva, our circumstances changed and the need for me to work alongside Ian in Sudan was coming to an end. We urgently needed a base for the girls and I, while Ian continued to work across Africa. After much discussion we decided the girls and I should move to Srem and finish rebuilding the house.

Initially we converted the small barn for us to live in while we worked on the house. Ian skyped furiously discussing plans and designs with our work force of Studena guys we’d met back in 2007 and now employed. The app was in its infancy back then and I’ll still remember the look on Tonio and Nasco’s face as I plonked the laptop down in front of them to discuss roofing issues with Ian who was sat in N’djamena, Chad, complete with backdrop of waving palm trees and meandering camels.

With no input from me, Elena our nearest neighbour made the decision to adopt us. Completely unperturbed by the fact neither of us could communicate, she would walk up the hill almost every night to sit with Eva and play with her chubby little hands, cooing and tickling. Initially I was deeply uncomfortable, I wanted to play host, try and make conversation, but she would shoo me away to have a shower or simply make a meal without Eva clamped to my hip.

And it wasn’t just Elena, Baba Diana would come with endless sets of colourful home-knitted booties, Baba Maria would come with jars of honey and tangerines. While I stood embarrassed that I couldn’t communicate my thanks effectively enough, they showed no such concern for pleasantries and continued to pinch little cheeks and share wide gummy and toothless grins at every opportunity.

Life at that time alternated between endless days of slow village life, furious spells of construction and moments of complete insanity, and it certainly wasn’t all ‘idyllic.’

I remember one particular visit from Ian, where we had designed a complex stairwell with curving cement stairs based around a tree trunk. The massive trunk had been chosen and deposited in our yard, yet till that moment it seemed we had given little thought to the logistics of HOW we would get it into place.

As we sat looking at the trunk and questioning our sanity, friends; Itzo, Nasco and Mitco arrived laughing. They had heard from the truck driver Svetlo (who was a cousin of Itzo’s) about our ‘tree’ and while they so obviously thought us certifiable, they knew we would need help. With Ian working alongside, they heaved it into place, laughed at us again and walked off down the hill.

By November, my parents came to visit and freaked out a little that we were living in a barn with winter looming.  They did attempt an intervention of sorts, but this just spurred us on to get the essential parts of the house finished before the cold really set in.

In an effort to inject some urgency, I blithely arranged a Christmas dinner for 14 people to be cooked and eaten in the house. I’m pretty sure all our intended guests made some solid back up plans that year, yet I’m proud to say it did indeed happen! Although all I can actually remember of the event is by 8pm Millie standing on the top stair of the newly finished 20-foot spiral stairs and projectile vomiting from top to bottom…

I remember that winter was spent mostly on my own with the girls, yet thanks to continual visits from village friends, I don’t recall it being a slog. I remember, nights in front of a roaring Petchka with Tumno beer, endless wood stacking/carrying/loading and the time the Mayor arrived to dig a path through the snow all the way up our drive to the front door and would accept only a small Rakia in thanks.

In the spring we constructed our raised bed garden (the first of their kind in Srem- causing much heated discussion). Another neighbour Pesho came up to help us construct our new home-made green house and give us an apple tree to replace the one he accidently bludgeoned in the green-house building process.

Tomato expert- Elena took all this garden activity as a very good sign of our assimilation but given the ‘raised-bed fiasco’ she clearly felt we couldn’t be fully trusted to do it all to her exacting green-fingered standards. Designating herself ‘project manager’ she oversaw much of the work, in the process grappling full control of the tomatoes, (which was fine by me, coming from the North of Scotland they were an impossibly exotic fruit anyway).

She did so much, from bringing up the tomato seedlings and planting them to watering and tending them almost nightly. Clearly there are some things a foreigner can’t ever be entirely trusted with!

Being alone much of the time with two small girls, I genuinely welcomed and encouraged the impromptu visits from neighbours and friends. I know some people are really not used to so much neighbourly interaction and can find it full on and obtrusive.

Living in rural Bulgaria really is all about the people, don’t think for a second your home will be a beacon of perfect solitude. Much of your neighbours’ interest will be curiosity, some entertainment value, and a lot of it comes down to the simple necessity of give and take. When someone needs your help you give it, because next time it could be you. It doesn’t matter if it’s a few surplus cucumbers or picking up a prescription in town. A full village mobilisation to fight a forest fire or a quick 10 minutes strimming an aging neighbour’s drive.

I didn’t realise it at the time, but back then when I arrived I had it really very easy. All I gave was the joy of having young children around, and with so many Babas so deeply missing their grandchildren, it was a magnetic draw.

Now they’re not so little, in fact I have two fully fledged ‘Tweenies,’ and it’s a different dynamic. Some of my favourites Babas have sadly passed away, and some have become just a hearty catch up in the village shop or at a garden gate, yet there are still one or two who have become fully-fledged, bona-fide grandmothers to the girls, as Elena has.

Rural Bulgaria really is all about community, and I think for some people who are not used to it; it can sometimes seem a little claustrophobic. Everyone knows what you’re doing, when you’re doing it and with who. From some of the stories I’ve heard in Srem over the years, (about both Bulgarian and foreigners) I honestly think even if they don’t know, they surely must be making it up?

Cursty and Ian are the owners of Konna Basa Sakar, a small horse-riding centre based in Srem village, Bulgaria. KBS follows natural horse-keeping methodology and the horses are all barefoot and live between a track system and the equicentral method. Both horses and humans at KBS work together to help children and adults create meaningful connections with animals and open access the incredible natural environment around the village. Activities available at KBS include; regular children’s nature and eco-camps, guided adventure riding tours to ‘off the beaten track’ local nature and archaeological sites, riding lessons, and carriage tours. For more information visit: https://sakarhorsefarm.com/